Instead of blogging and journaling, people can now record videos or vlogs to document their days. However, if you have a large, heavy camera, talking to a camera and posting about your day online can be a pain in the arm. Each of these compact cameras has a body weight of less than one pound.

But don’t be misled by the camera’s size. These devices are strong and capable of recording stunning videos. In actuality, every camera on our list has remarkable stabilisation and digital zoom capabilities in addition to having more than 20 megapixels (MP).

Sony has officially surpassed Canon and Nikon as the leading camera brand, and this camera makes that fact very clear. Your films will be exceptionally clear and have outstanding clarity even when put in slo-motion thanks to the 4k video capabilities and the ability to capture 120 fps.

Personally, I had no idea that mirrorless cameras of this size and kind could support interchangeable lenses. Although this camera can be purchased with a variety of lenses, the 16-50mm lens is the one that is most frequently used.

This camera is on the more costly end of the vlogging camera market at $800 when purchased with the lens. However, this camera is still a top-of-the-line gadget, and if you want the best start to your vlogs, this is the camera for you.

This Canon EOS M200 and the Sony Alpha ZV-E10 are both mirrorless cameras with interchangeable lenses, and they both have a 24.1MP sensor. But the cost is the largest distinction. This camera can do many of the functions of its more costly rivals for only $550.

When purchasing a camera, be sure it can produce 4k footage because that resolution is replacing the standard 1080p one. The EF-M 15-45mm f/3.5-6.3 lens that comes with this 4k camera is ideal for beginning your daily vlogs or home video library.

This Canon EOS M200 includes a 3″ LCD touch screen that can be adjusted at different angles so you can always see what your camera sees to make vlogging easier.

The best camera for vlogging in terms of frame rate

In sports photography, GoPros are now commonplace. You can mount this camera to almost anything thanks to its more than 30 mounts and accessories. There is also no circumstance in which you cannot use this camera. with a durable construction and up to 33 feet of waterproofing.

Although the camera is primarily intended for recording video while in motion, utilising it to vlog could be ideal if you want to shoot in challenging circumstances. None of the other cameras on our list can film in 5.3K resolution at 60 frames per second like this $400 camera can. In addition to the superb quality, the camera body has screens on the front and rear so that photographers can check their compositions.

Brand loyalty is quite strong in the photography profession. I will keep purchasing these Canon items as long as nothing extraordinary convinces me to switch. This camera weights exactly what it is quoted at without an interchangeable lens. A lightweight camera is the best method to ensure steadiness when vlogging, which calls for a steady hand. It is one of the tiniest vlogging cameras of this calibre and is lightweight as well.

The most versatile camera for vlogging

Consider all the additional uses for the camera in addition to vlogging when deciding how much money to invest on one. Versatility is important in the camera market, whether it is for videography, sports photography, or landscape photography. This camera can film continuously at up to 21 frames per second, making it useful for more than simply video.

With shutter speeds ranging from 30 to 1/32000 and a burst rate of 24 frames per second, this camera offers fantastic chances to capture moving objects. Our camera, like the most of the others on this list, has a 3″ LCD touchscreen that you can adjust to see what you’re capturing.

What is the best camera for vlogging?

The Sony Alpha ZV-E10, with its superb video quality and interchangeable lenses, is the greatest vlogging camera. Despite the camera’s diminutive size, it has tremendous technology inside. This mirrorless camera, like the Canon PowerShot G7 X MIII, can record videos with a variety of lenses.

Although we believe it to be the best alternative available, there are many other choices, such as GoPro and Canon devices. Here is a table that contrasts the salient characteristics and costs of these top vlogging cameras.

Which vlogging camera is best for you?

Every product on the market has a different use for every user. To choose which vlogging camera is best for you, take into account this chart before making a decision.

Select this camera for vlogging…

You want to start filmmaking but you don’t want to spend a fortune.

It is necessary to have a camera that can withstand elements like water, dirt, wind, and snow.

are a Canon aficionado who wants to keep buying their products.

Want to utilise your camera for purposes other than recording video.

How were these vlogging cameras selected?

Dimensions, weight, image quality, and cost. These are just a few of the crucial factors we took into consideration while deciding which vlogging camera is the finest.

Being somewhat new to the world of “professional” photography, I only recently purchased my first DSLR. However, I’ve been taking pictures for more than three years, so I know what to look for when choosing a camera.

Even while these cameras aren’t DSLRs like the ones I’m used to, the technology inside of them makes them good options for a casual photographer looking for a portable camera.

What tools are required for vlogging?

All you need to start vlogging is a camera and an SD card to store your video. But if you’re serious about making content in this fashion, you’ll probably also need a tripod, computer editing software, a clip-on microphone, and other small extras.

What qualities should a vlogging camera have?

The best place to start with any camera is to make sure that it has a high megapixel count. Additionally, you need a camera that can film in 4k or at the very least 1080p that can handle the lowest aperture.

Does vlogging require a flip screen?

In a nutshell, absolutely if you want high-definition videos. You won’t be able to see what your camera is aiming at without a flip screen.

Are there any other vlogging cameras that merit consideration?

It is untrue to say that “a photographer is only as good as his camera.” Although having a sophisticated, high-quality camera is helpful, how well it is used ultimately depends on the user. Although the five vlogging cameras on this list are the best available, there are a few options you should take into account before buying.

Due to a financial issue, Ukraine lost access to 1300 Starlink terminals. 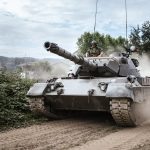