On the sun, the celebration has begun. The activity of our host star has recently increased, and on Sunday it produced a spectacular X1 solar flare. NASA’s Solar Dynamics Observatory saw the large radiation explosion. On the right side of a picture released by NASA on Monday, the large flare can be seen as a bright point.

The X1 solar flare on October 2, 2022 is the intense flash that is circled in red.

Classes exist for the solar flares produced by the sun. An X-class flare is the strongest; an A-class flare is weak. Numbers are assigned to X-class flares; higher numbers indicate more powerful flares. In 2003, scientists recorded a massive X28 flare.

The sun’s most recent volley this year is the X1. In April, it produced an X2.2. According to a statement from NASA, solar flares and eruptions “may affect radio communications, electric power grids, navigation signals, and pose threats to spacecraft and personnel.” The aurora can become more active as a result of these eruptions, producing stunning swirling lights in the sky.

Solar cycles, which last 11 years, see the sun’s activity wax and wane. It is presently in Solar Cycle 25, and as it approaches the solar maximum in 2025, it is accelerating. That implies that in the near future, we may anticipate seeing more striking flares. 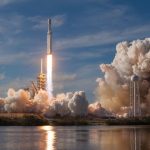