The macOS Catalina is the latest version of the Mac operating system. You can now update your mac macOS Catalina by the download link provided in this post. Let us know the facts about Catalina; Named after the Santa Catalina Islands – off the coast of Long Beach, California- the operating system has a lot of features that make an upgrade worth your while.

Release Date: It was revealed during Apple’s 2019 WWDC keynote in June, it was released on October 7th, 2019.

It is compatible with:

The macOS Catalina is available on the Mac App Store. You can download it here though the download is going to be several gigabits large. It might be ideal to use a stable internet connection and have enough storage on your device when upgrading. Also, be sure to upgrade at a time when you won’t be using your device. Upgrading to this new version will be absolutely free.

At its core, the performance of the macOS Catalina has been increased in comparison with other versions of the OS. It has several major additional features, as well as new apps, with some revisions to some few apps too. Some of the major features include:

Certainly, the new OS is aimed at improving your overall experience. However, it might be worthy to note that 32-bits apps will no longer run on this operating system. If you have any such apps, you should be cautious about upgrading to it.

My Experience of Working with Khalsa Labs – Kelvin Mwangi 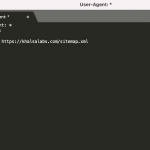 How to Add Robots.txt in Django Easy Way